The latest in our Winter Wishlist series is perhaps the most speculative of all, Aston Villa keeper Brad Guzan. He may not be Buffon, but Guzan's stature and improved play would serve Roma well in the immediate future.

The latest in our Winter Wishlist series comes with a few caveats. First and foremost, this speculative transfer is just that, speculative. It's a sham, pure malarkey, a mere figment of my imagination. My desire to see Brad Guzan protecting Roma's goal line cares little about the four year extension he just signed with Aston Villa, or even considers that he'd willingly leave "the world's best league" to come to Italy. And we haven't even mentioned how difficult it is to speak intelligently about goalkeepers, but, if you'll hear me out, let me tell you why the latest in a sort of long line of great American keepers should move to Roma.

The Current Crop of Keepers

Before we examine Guzan, a quick look at what Roma currently has at her disposal. While Morgan De Sanctis has availed himself quite well in his first three months in Roma, there are, as you might recall, three more keepers on the roster.

MDS, for his part, is 36-years old, 1.90m and 80 kg, but my desire for Guzan has little to do with De Sanctis' current performance. After all, MDS' 10 clean sheets, three goals allowed and 315 minutes per goal conceded all lead Serie A. When Roma signed De Sanctis, they knew what they were getting, a solid keeper with ample Serie A experience, one you can depend on, even if he may cause minor palpitations.

What we didn't expect from De Sanctis, however, was the sort of leadership he's provided. Lost amid the Great Goalkeeper Debate from last season may have been a simple matter of linguistics. Neither Stekelenburg or Goicoechea (I think I forgot how to spell that correctly) knew the Italian language, much less the Italian game. Bringing in an Italian with years of success in the league was an upgrade in and of itself. When you look at his presence on the pitch, his good natured antics off it, and his rapport with his teammates, had he come to Roma 10 years ago, there's no doubt he'd be a club legend.

Alas, that isn't the case, but the numbers say MDS has been the best keeper in the league thus far, though much of that is attributable to the defense in front him. So, while he's been better than expected, he was never brought here to be the long term solution. At 36-years old, his two year stay in the Eternal City will probably mark the last of his useful days (as a keeper, not a man, this isn't Logan's Run), but beyond that, what's left in the cupboard? JSB and Lobont are just as old and were never quite as good, and Skorupski is far too inexperienced to rely upon.

So, it would seem that Roma will need a ready, willing and able keeper for the foreseeable future, and perhaps as soon as next year.

Behind the scenes here I've been touting the merits of Brad Guzan for a year or so, much of which has fallen upon deaf ears, but thanks to work like this, it seems my heretofore irrational yearning for Mr. Guzan finally has some empirical evidence to support it, a term I use loosely, I might add. As hard as they might try, nuanced goalkeeping statistics still seem a bit too contrived to win any real arguments. In fact, whoscored doesn't even provide a definition for a successful high claim, though I suppose it's fairly self-evident, but is a high claim relative to the keeper's stature? Does parrying count? It's a step in the right direction, but still lacking clearly definable measures.

There are, however, some statistics that make more sense--saves per goal, saves per match, minutes per goal conceded, save percentage, for example--but those are, again, largely dependent upon the quality of a defense and the tactical position of both teams. And while a porous defense necessarily leads to more shots, a keeper with better positioning, better reflexes, and a better understanding of how an attack unfolds can bail his mates out; it's a viscous chicken and egg scenario. Are a keeper's numbers better because of skill or simple opportunity?

The fact of the matter is the very nature of the sport makes it hard to measure the true contributions of the man between the sticks. There simply aren't enough shots on goal to determine who's most adept at keeping them out, at least not in any statistically significant way. Though, it must be said, there is some interesting work out there that takes into account actual saves vs expected saves, type and location of shot etc. Unfortunately for us, it has a heavy Premiership bent, but if you're statistically inclined, it's some intriguing and damn fine work. Their numbers weren't terribly kind to Guzan in 2012-2013, however, but he was fourth in the premiership with 125 saves, which is pretty impressive when you consider Aston Villa conceded the second most shots in England last year. Chicken, meet egg.

Why, then, should Guzan be considered an upgrade over DeSanctis?

Well, let's start off with pure physics and simple chronology. At 6'4'' and nearly 210 pounds, Guzan would be the tallest and thickest player on the Roma squad, and one of the league's biggest keepers. One look at the man, and it's clear as day, those 200+ pounds are pure muscle. While he won't necessarily have the same spring in his step as a smaller keeper, his sheer size is an advantage in and of itself, and I'm not even talking about the site of him colliding with Luca Toni or Mario Gomez on an in-swinger, he simply occupies a larger space in front of an attacker. In terms of age, at 29 Guzan is entering the prime years for a keeper and, even on a four or five year stint, he could serve as a bridge to Skorupski, or whatever fortunate soul Walter Sabatini plucks from obscurity next. So, in addition to getting a keeper approaching his peak, Roma wouldn't necessarily have to sacrifice the future by shipping out young Lukasz for a few years.

While that's all well and good, what about his abilities suggest that he'd be fit for Roma? If you look at the link above, the stats last season weren't particularly kind to Guzan, as his save efficiency ratings--in terms of overall, inside shots, and outside shots--weren't exactly stellar. However, when we shift to 2013-2014, we see a slightly different Guzan, with the requisite caveat that goalkeeper statistics are subject to veracious scrutiny. 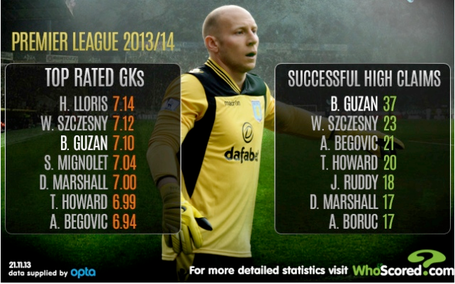 However, this mashup of information and graphics is indicative of the progress Guzan has made over the past year. In addition to those figures, his 84 minutes per goal conceded is tied for fifth in the Premiership among keepers with at least ten appearances, while his five clean sheets are tied for third. With Guzan's improved play and Villa sitting in 11th (they were 15th last year), he's starting to make a name for himself apart from being Tim Howard's backup on the national scene. In that sense, I suppose Guzan and MDS have a lot in common, with Gianluigi Buffon serving as De Sanctis' Howard, as strange as that might sound.

Although that is merely the data from one provider, no matter where you look, Guzan falls among the top ten, and, in some instances, top five keepers in the Premiership, which is no small feat when you consider the quality of the players in front of him. Aston Villa ranks third worst in possession and second worst in passing percentage, all of which means they spend an inordinate amount of time defending, though to be fair to the Villains, they're middle of the pack in terms of shots conceded.

If any of this has seemed a bit meandering, it's simply because speaking objectively about keepers is rather tough; it's hard to be objective when so much of the position is subjective. For example, let's look at what precedes a save, a shot.

Keepers can't control how high up the pitch defenders press, they don't decide who marks who, or how/when to deploy the trap, etc. So many of the factors that influence their performance are beyond their control, which is why, for so much of the sports history, analysis of goalkeepers was rooted in emotion and opinion. He knows how to read the game, he's a good communicator, he stays calm. All desirable qualities in a keeper, of course, but they're inherently irrational.

That being said, the data we do have on file--the methodology of which is proprietary and not available for public consumption, unfortunately--suggests that Guzan has made some significant strides this year, particularly in terms of what he can control, saves and claims ( in terms of his ability to make them, not gross totals). Which, when you read it back, sounds like we've devoted all this time to an accountant.

So, the metrics aren't perfect, but they suggest we've yet to see the best of Brad Guzan. With that in mind, let's see how much sense this fictional transfer makes.

Tactical: 6.5 When we talk about the tactical fit of a keeper, there isn't much to say. If Zeman were still in charge and Roma's keepers were more prone to one v one attacks, perhaps a more agile keeper would be the choice, but with Leandro Castan and Mehdi Benatia forming one of the league's best pairings, Roma's keepers have been relatively safe from direct threats all season. However, given how well his size and strength would play in defending set pieces, we'll give him a bit of an edge, and take a few tenths off for his distribution numbers, which aren't on par with MDS this season.

Financial: 8 Guzan's market figure seems to be around €4.5m, certainly not beyond the reach of Roma, but far more than they've paid for a keeper in quite some time. However, as we mentioned, given his age, you'd be getting him during the peak years of his career.

Chemistry: 6 With Michael Bradley being the only other native speaker of English, this is really all dependent upon how quickly he'd pick up a functional understanding of Italian. But, having waited patiently for his chances at both the club and country level, nary a word has been spoken about Guzan being a prima donna, so there's no worry as far as that is concerned.

Probability: 2 This one's all me, I am the only ostensible link between Brad Guzan and a move to Roma, as far as I know. To me, it makes perfect sense, Americanism aside, he won't make anyone in Italy forget about Gigi, but his form this year suggests that he's coming into his own as a professional keeper, to the point where the Guzan vs Tim Howard debate in American circles is actually picking up some steam. Remember, if America does one thing well (in terms of football), its keepers, so the fact that Howard's place in Jurgen Klinsmann's XI is in doubt speaks volumes about Guzan's ascendency. In the cold light of day, however, this move looks impractical. Guzan just penned a four year extension with The Villans and, barring a return to the Champions League, there isn't much Roma can offer him that Villa can't at the moment, except the world's freshest reserves of Nutella.

This speculative transfer was intentionally low-key. MDS is good for now and figures to keep the job next season, but once his contract expires in 2015, who is left? Skorupski still figures to be years away and, unless they go for broke and try and pry Sirigu away from PSG, a Guzan type might be their best bet for the short term.

So there you have it, now have your say, which keeper would you like to see in Roma now and in the future?